ford Historical Society has been established over 45 years. It is governed by a committee elected by its members at Annual General Meetings. We organise meetings during the winter on the 2nd Monday of each month. These are held at Redbridge Central Library from September till May inclusive. There are illustrated talks on local and general history with an interval for free refreshments. Visitors are welcome to attend for a small fee payable at the door.


The last in our series of summer walks led by IHS president Jef Page is:

There will be talk of church, cigarettes, chequers & children.

Valentines Mansion
In ancient times Ilford was part of Barking parish, so much of our history is linked to that town and abbey, founded there c.AD 666 and demolished in 1541-2. The Hospital Chapel of St.Mary the Virgin and St.Thomas of Canterbury was founded c.1140 by Adeliza, Abbess of Barking and this is the oldest and most interesting building in Ilford.

Much of the northern part of the parish was covered by Hainault Forest until an Act of Parliament in 1851 enabled the grubbing up of over 100,000 trees.  Ancient grazing rights were continued beyond that date. 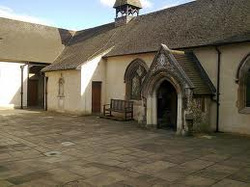 Ilford Hospital Chapel
In 1830 Ilford was created as a separate ecclesiastical parish with the building of St.Mary's church in the High Road, but it was not until 1888 that Ilford took over its own municipal responsibilities, electing its own council. It was essentially a large village with small hamlets and farms and some grand houses. In 1891 the population of Ilford was 10,711 but ten years later it had grown to 41,235 as there was a major house building boom and population influx of new families.

In 1926 Ilford became a Municipal Borough and in 1965 it was merged with Wanstead and Woodford to form the London Borough of Redbridge. Apart from Ilford itself, the Municipal Borough covered Loxford, Seven Kings, Goodmayes, part of Chadwell Heath, Aldborough Hatch, Hainault and Barkingside. As this is the area covered by our society we have adopted the Ilford Borough Shield as our new logo. It  shows ermine, an oak tree, the crowns of the "Seven Kings" and the water of the  River Roding .